Oh my gosh! Is this the messaging that’s going to come out of the “Meeting on the Protection of Minors?” Are they actually going to go with blame the victims?! This is insane. https://twitter.com/MassimoFaggioli/status/1097857305712967681 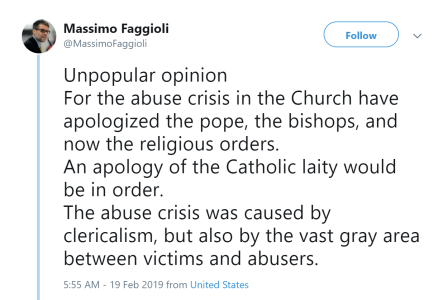 Massimo, what kind of drugs are you on??? “Unpopular opinion?!?” That’s the understatement of the year. You just said the Catholic laity should apologize for priests who can’t handle their vows and promises of celibacy and chastity. Un-flippin-believable. I would have thought you could just look around and think that the “She asked for it!” argument is kind of sorta disgusting, but I guess I should know better by now. You’ve got issues. For the guy who is supposed to be an expert in the “role of the laity,” you seem to think that the role of the laity is that we are supposed to be the scapegoat of the immoral clergy. Nice try.

Your buddy, Fr. Martin, SJ, told us the former not long ago:

However, in this case, to imply that the laity, in any way, should perform any kinds of penances, including fasting, is simply wrong. The laity should not have to do one minute of penance for the crimes, sins and failings of the hierarchy and the clergy.  https://onemadmomblog.wordpress.com/2018/09/17/fr-martin-dont-be-that-guy/

Let me help you both out. You’ve both got it totally wrong. This is in no way the fault of the faithful, and yes, we should be doing all of the fasting and penance we can to make up for those who aren’t doing it themselves. If you’re going to scapegoat the faithful on behalf of the depraved, you, Massimo, are part of the true problem.

16 thoughts on “Let the Scapegoating of the Faithful Begin!”