When I started writing in the blogosphere, it was simply a way for me to say what many others were thinking – a way to vent and give my family a little break from my ranting.  I never really thought anyone would read it, but I’m very thankful it’s turned out the way it did.  I’ve “met” some amazing people around the world and I’d like to talk about one guy in particular.  He’s a FAR better writer than I will ever be, and his incredible patience and charity in the face of adversity amazes me.  He’s one of the main reasons I give Fr. James Martin, SJ, any attention.  Honestly, Fr. Martin doesn’t affect my family much, if at all, but his actions do affect my friends and many I meet.  He has injured so many people, body and soul, that the mom in me just can’t stand for it.  He and his cronies are predators of souls and I will continue to repeat that as long as it is so.  I hope my little voice over here annoys him like a thousand flea bites.

So, on to my amazing friend, “Thomas from Michigan.”  I have asked his permission to reblog a comment he made.  Why?  Because he nails it.  He’s got “street cred” and should carry far more weight than I can in the arena of same-sex attraction (SSA).  Go ahead, liberals, try and tell him he doesn’t have a clue.  By the way clergy, if you’d like some advice from him on ministering to people suffering from SSA, I’ll gladly put you in touch.  (FYI, I made that last comment without consultation.  Thomas is probably cringing as I throw him under the bus!  Sorry, Thomas, I’ve just got this idea that people like you are going to save the Church.)

Let me set the stage for you…

I have a long time dissenting reader.  I have to say, though, I really do love her.  I suspect that annoys the heck out of her, but I realize she’s a product of her lack of Catholic education.  I’m a little tweaked that she was robbed.  Anyways, here’s one of her comments on my last post, Open Rebellion Coming to a Church Near You:

OMM, I genuinely want to know why you and the others here are afraid of gays and their lifestyle being accepted by some in the church. How does it affect you? Do you think your children will catch it? Do you speak out as loudly against murderers, adulterers (Trump), thieves, etc. Maybe you do, I just don’t see it in your blog.

(She completely points out she’s missed quite a few of my posts but, whatever.)

Here’s the super-important part of “Thomas from Michigan’s” reply (emphasis mine – please go to link for full exchange, although there wasn’t a reply to Thomas from our liberal friend, because there was NOTHING she could say about it.):

The Holy Mother Church loves all of her children–even me. For nearly a decade, I was out and proud. (Nearly a decade has passed since that chapter of my life closed.) I was quite hostile to any religion that didn’t approve of my behavior. I was the president of a social group for gay men over the age of forty. I can’t even remember all of the sexual partners I had–and I was considered a bit of a prude. I especially enjoyed hooking up with men who were in what they themselves described as “committed relationships.” I regularly made fun of those who attended Dignity’s Mass. I also got three different STDs (sexually-transmitted diseases), kind of like getting three prizes in one box of Cracker Jacks.

Biggest mic drop EVER!  THE CATHOLIC CHURCH THINKS WE DESERVE BETTER!  It’s so simple, people.  Fr. Martin can spin it all he wants, but this should be the central message from our Church to combat his stupidity.  How about something like:

We don’t want your  death – spiritual and/or physical. The Catholic Church wants better for you!

Of course, the same message applies to all of us.  The Church wants to help us conquer sin because She wants better for us!  Duh!

The “Catechism of the Catholic Church” includes homosexual behavior in its discussion of the Sixth Commandment–the one that says adultery is wrong. The fact that many in our culture–and Church–seem to think other forms of adultery are acceptable doesn’t mean they are. All baptized persons are commanded to be chaste. The fact that some priests want to give some people an exemption doesn’t change that.

That segues nicely into this! For those of you who don’t follow my Facebook page, I shared this video from Jason Jones, which perfectly explains to my liberal friend where we faithful Catholics are coming from (can you believe I’ve finally figured out how to embed these?!).  While I’m not sure Fr. Martin is a “New Donatist”, this sums up the feeling the faithful Catholics have about Fr. Martin.:

We are all in this together and we’re supposed to help each other struggle on!

Onto Fr. Martin’s lapse of sanity this week.  He’s LIVID with Bishop Thomas Paprocki of the Diocese of Springfield.  If Martin is livid with you, I’m sure you deserve a hearty “Kudos!”, Bishop Paprocki!  I’m reasonably sure it was not your intent, but you know you must have done something right.  Fr. Martin is TERRIFIED that other bishops will follow suit and really drive home the deadliness of sin. He can’t have that! 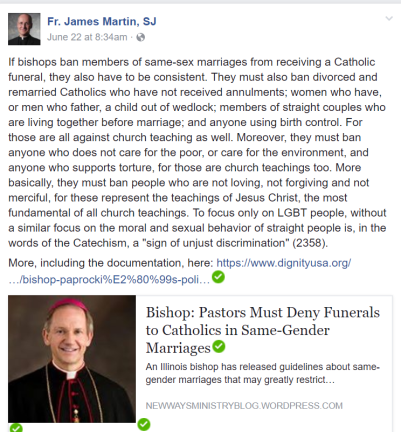 As you can see, Fr. Martin is going to use the whole kitchen sink approach in the hopes you will get lost and the pile-on will make Bishop Paprocki look really mean ol’ guy.  Sorry, Fr. Martin.  Bishop Paprocki follows Canon Law, unlike some people I know.

Let’s look at it, shall we?

http://www.vatican.va/archive/ENG1104/_P4C.HTM
CHAPTER II.
THOSE TO WHOM ECCLESIASTICAL FUNERALS MUST BE GRANTED OR DENIED

Can.  1183 §1. When it concerns funerals, catechumens must be counted among the Christian faithful.

Can.  1184 §1. Unless they gave some signs of repentance before death, the following must be deprived of ecclesiastical funerals:

2/ those who chose the cremation of their bodies for reasons contrary to Christian faith;

3/ other manifest sinners who cannot be granted ecclesiastical funerals without public scandal of the faithful.

So, as we see, Fr. Martin’s nice little list is ridiculous.  Does he have a clue what the distinction of “manifest” means?  You bet he does! He’s just trying to use a bit of smoke and mirrors to make you miss that one.  If you’ll notice, Bishop Paprocki said that signs of repentance negated exclusion.  Nice try, Fr. Martin.  So, yeah, the person who announces to the world “I use birth control even though the Church says it’s a mortal sin! Look at me!” probably shouldn’t be getting the funeral in the Catholic Church.  Why?  Because they are manifest sinners who are causing public scandal.  Duh.  Mary and Joe Anonymous are birth controlling Mass attendees but don’t go around shoving their sin in everyone’s face?  Do you really think they are going to be denied?

Fr. Martin knows all of this.  He’s not uneducated in the matter.  He’s just hoping to confuse all of those who might not be.  Like I’ve said before, he’s a predator.

So, Father Martin, tell me exactly how Bishop Paprocki’s guidelines go against Canon Law.  Oh, that’s right.  They don’t.  And, by the way, BISHOP PAPROCKI IS A CANON LAWYER and you are not, Father.  I just Googled, and Ed Peters, of course, has already destroyed you and your ilk here.  Please, good people, share this one: https://canonlawblog.wordpress.com/2017/06/23/bp-paprockis-norms-on-same-sex-marriage/

Let’s look at your other insinuation, Fr. Martin.  “Unjust discrimination” my foot. I missed the part in Catholic teaching where every social ill must be addressed by the local bishop on the same day.  The reasons these directions have to be issued these days is because of people, especially priests like you, who are making clear teachings murky.  I think what you fail to understand is that threat of exclusion from the Sacraments is a remedy for the sick soul. Actually, I’m pretty sure you do understand. The problem is, Fr. Martin, you are encouraging the illness.  It is supposed to urge them to repent before it’s too late, but with people like you running around telling them they are being persecuted instead of loved, they’re dying without repentance.

I’m just going to hit on one last thing that hit last night before this “went to press.”  The Gaffigans.  Not really sure what the heck they were thinking with this:

How could a family who seems to have a grasp of the Church’s teachings on Natural and Moral Law in the area of being open to children be so wrong on this one is beyond me.  And how about just a little science?  Are Jim and Jeannie really cheering on the dramatically increased diseases found in the “gay lifestyle” they are cheering? Are they fine with encouraging behavior that brings early death to so many?  Let’s just take a look at a few of these beauties:

But love is love, right? Hello!  Typhoid and Giardia are now falling under sexually transmitted diseases.  What the what, Jim and Jeannie????  Care enough to talk reality?

If anyone is going to try and make yourselves feel better  by bringing up the fact that there is a presence of some of these diseases/problems in the heterosexual community, save it.  DO THE RESEARCH!  Having one or any combo of these is the NORM in the “gay lifestyle.” Some are most certainly found in promiscuous heterosexuals, too, which is one reason why the Church is against that, too.

How about we stop calling it “pride” and start calling it “dangerous”?  That’s the reality.  We haven’t even gotten to the spiritual aspect of the “gay lifestyle.”  I was just called a hater last night by our resident liberal friend.  Really?  Look at the above list!  Do you want this for your friends??? I look at people like my friend Thomas and I get very mad at the Fr. Martins of the world who encourage the disease, moral decay, and spiritual death under the guise of “love.”  Peddle your rusty, rotted bridge somewhere else, Fr. Martin.

If you are a person suffering from same-sex attractions, Catholic or not, please look further into the reality of the Church’s love for you.  Fr. Martin – I can’t say this any more clearly – is trying to aid in stealing your soul.  The Bishop Paprockis of the world are the ones who truly love and care for you.  As Jason Jones points out, we should all be struggling together.  Don’t fall for the pandering of Father Martin and company.  They have an agenda and their main aim is NOT your physical or mental well-being or for you to live an eternal life with Our Lord.  THE CHURCH THINKS YOU DESERVE BETTER!

Pray for Fr. Martin.  The Church wants better for him too.  Hopefully he’ll see that and struggle along with the rest of us.

17 thoughts on “The Catholic Church Thinks We Deserve Better!”