Merry Christmas and Happy New Year to you all! Oh, and “Happy Holidays” to the dissenters. I’m back from “vacation” (doing that family thing) and ready to take on dissent! Woot! Rah-rah-rah! I may be just a little inspired by bowl games but here goes!

Fr. Jim Sickho apparently isn’t really new, but he is new to me after running across my laptop in the last few weeks. I debated his lame, ignorant, political tweet (below), but then, after looking at his Twitter page, I started wondering if maybe I was debating a parody account. I have since done some research and, nope, he’s real. Sigh. I think we’re suddenly hearing about him only because he’s just jumped the shark. Some people will do anything for ratings.

This was my first exposure to the latest “Fr. Jim.” (Poor St. James. His namesakes are not being kind to him.)

So many errors in one little tweet. I guess one out of three ain’t bad. Just a quick clean up of his ideological take. The Holy Family was Jewish. Yay! He got one. However, they weren’t immigrants, nor were they unmarried. Fortunately, many of the 608 comments pointed out that glaring stupidity .

While I was enjoying my break, I saw his next attempt to woo the liberals. I can’t show it all to you because the original tweet has been deleted, but Fr. Longenecker paraphrased it nicely here. (By the way, since Fr. Longenecker has dared to challenge Fr. Sichko, he’s been banned.) It said something very close to this if not dead on:

Let us all remember during this time of the Holy Family that all families are holy. Some are heterosexual and some are homosexual. Some are single mothers and some are poor, divorced or widowed.

Oh, yeah, the Holy Family’s situation is the same as “man-made” family tragedies like divorce and abandonment. Um, really??? Of course, there was a wee bit of a backlash for these posts.

Like I pointed out, interestingly enough, the tweet we’re all about to be accused of leaping to judgment about has been removed. Why? Because Fr. Sichko knows it was wrong. They were his words and he can’t defend them. But, yeah, let’s ban Fr. Longenecker instead of actually dealing with his arguments. So merciful.

Here’s today’s litany of “You’re a bunch of mean judging, judgy people!” ranting tweets. All I can say, if you decide you’re going to play the game, you better be ready for the defense or you might want to stay on the bench. But, noooooo! He’s gonna go with the “Hey, I’m a quarterback!  I’m special! Not my fault I can’t complete a pass to save my life! It’s the mean, old, judgmental receivers!” (Told you the bowl games are on! Go Bears! They won by the way.)

First, I’m pretty sure that you being a “Papal Missionary of Mercy” doesn’t make you infallible. (Actually, I’m quite positive, since your tweets show the opposite.) Next you either volunteered or were appointed by your bishop, and the Vatican probably gave you a nice little certificate to show for it, but ALL priests are missionaries of mercy. All your title does, essentially, is put you at the bishop’s beck and call for any special Year of Mercy activities. The rest is plain old priestly duties, so please don’t make it sound like it’s some higher education appointment.

Next, let’s be clear. We’re not judging those in tough situations. We’re judging YOUR actions, or, in your case, repeated uneducated comments that are very misleading and wrong. We are ALL called to holiness. To say that everyone is holy simply by virtue of being in a family is ridiculous and doesn’t call people to avail themselves of God’s mercy. (Maybe somebody should revoke that Missionary of Mercy certificate). That is what priests are supposed to do. You are supposed to call us to repent and avail ourselves of God’s mercy. What you originally typed was not that, so, yeah, we can judge that it was a stupid statement. What’s worse, giving people a pass like that victimizes CHILDREN who are OWED parents who help lead them to salvation. Does that happen for all children? Woefully, no.  We all fall short, but that doesn’t mean we simply champion parents who don’t. We don’t need priests who tell us we’re grand (and this goes for all of us) when we are scandalizing our children. 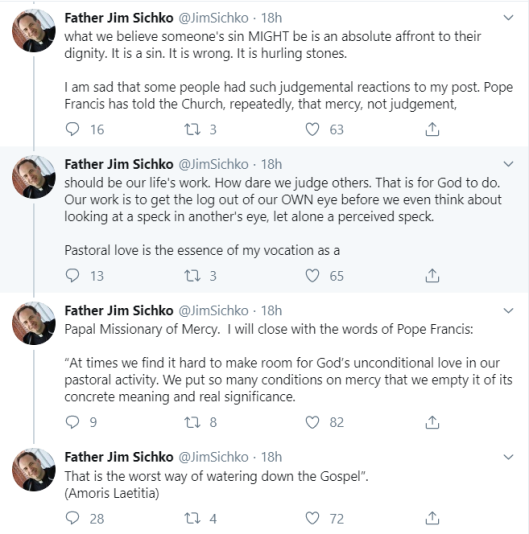 Here’s more of the same liberal canard we’re regularly subjected to.  So, for the newbies, we CAN judge ACTIONS, we CANNOT judge SOULS. Fr. Sichko, the Pope, and every other person on this earth judge actions on a daily basis. In fact, calling people judgmental is making a judgment. Or how about saying someone has a log in their eye? Sounds a little judgy, Father. Duh! At least you’re exemplifying the meaning of the passage well. So, I’m all for removing the logs in from our eyes.  But please, let’s help others do the same because that’s what we’re supposed to do as the Body of Christ.

Finally, I’m not sure that Fr. Sichko understands what the “essence of his vocation” is. It’s to lead souls to heaven. It’s to be Christlike and tell people to “Go and sin no more!”, just as he did with the adulteress. That’s kind of hard to do when we can’t even talk about objective sin. Moral relativism isn’t going to save a soul. Telling people their holy when they’re not won’t help either. Truth will. That is where true mercy is found.